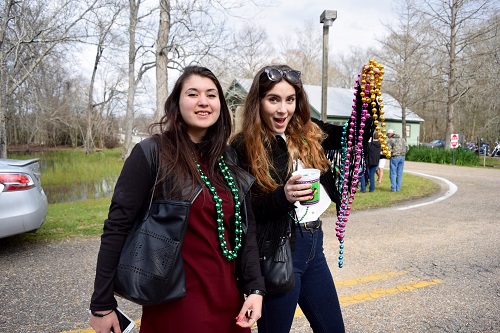 1) Mardi Gras Dates:
Mardi Gras 2022 is March 1, but the date fluctuates year to year. The Catholic Church designed the Gregorian calendar with a fixed date for Christmas and interchangeable dates for other religious holidays. Mardi Gras is scheduled 46 days before Easter (40 days of Lent + 6 Sundays). Easter will always occur within the first Sunday after the full moon that follows the Spring Equinox. Carnival season officially opens on the Epiphany, 12 days after Christmas, and ends the day before Ash Wednesday, Mardi Gras Day.

2) Carnival vs. Mardi Gras:
Carnival is the season of feasting and fun, which begins Jan.6, the Feast of the Epiphany. Mardi Gras refers to Fat Tuesday, where all that fun and revelry comes to a head before Ash Wednesday. Mardi Gras is essentially  a last hurrah before Lent begins.

3) Purple, Gold & Green:
New Orleans’ Rex was the King of Carnival and selected the colors of Mardi Gras in 1872. To honor the visiting Russian Grand Duke Alexis Romanoff, the businessmen introduced Romanoff's family colors of purple, green and gold as Carnival's official colors. In his 1892 parade “Symbolism of Colors,” Rex assigned meanings to each color: purple represents justice, green for faith and gold equals power.

4) Krewes:
A Mardi Gras Krewe is the membership organization for a parade. They gather for the Coronation Ball where the court for that year’s Mardi Gras is announced. They also hold a Mardi Gras Ball or Tableau, which is where the Krewe usually appears in their parade outfits/costumes. The Krewe are responsible for the “throws” of their parade. Did you know that by law, float riders must always have a mask on? The original purpose of the mask was to get rid of social constraints for the day. 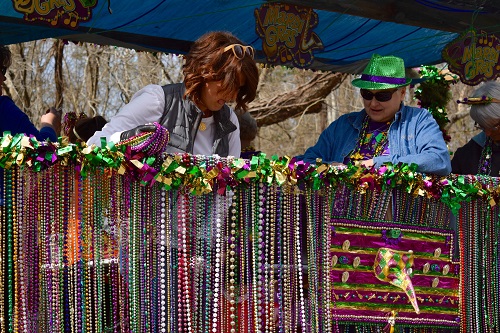 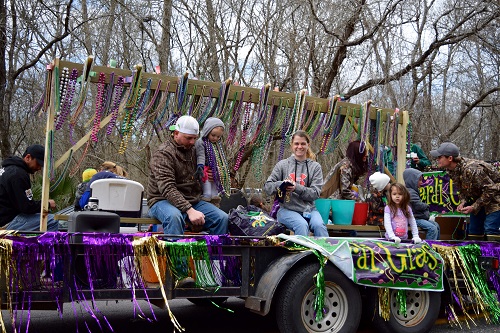 The phrase “Throw Me Something Mister” is the traditional chant that parade-goers yell to get Krewe riders' attention, and then there are the more…risque options that those on Bourbon Street are known for, but rarely happen elsewhere (even in New Orleans). The goal is to go home with the most “throws,” which are usually inexpensive trinkets tossed from floats. The tradition began in the early 1870s by the Twelfth Night Revelers. Doubloons (coin-like souvenirs that bear the Krewe name and crest on one side and theme and year on the other), cups, beads, stuffed toys, etc. are a few of the items thrown. In the New Orleans Bacchus parade, the King's float throws doubloons with the image of the celebrity king on one side of the doubloon, and Zulu give elaborately decorated coconuts. Yes, coconuts. (And you’d be surprised how many newbies have lost fingers trying to grab one of those little devils.)

6) King Cake:
My mouth is watering just anticipating the return of these local treasures. The “King Cake” began in 12th century France when a cake was baked on the eve of Jan. 6 with a small token hidden inside. Whoever got the token became the royalty of the night. Nowadays, whoever gets the token buys next year’s cake. Everyone has their favorite flavor and maker of King Cake and their choice will never be swayed.

You’ll find a list of locations serving King Cakes along with a list of parades in our area here. Our information came from various sources including Lafayette Travel, New Orleans Mardi Gras and our own records. So, while we get ready to Mardi Gras in Iberia Parish, we hope to see you soon in all your purple, green and gold glory!