On the Road with TABASCO® Food Tours

What to expect when you take a trip on the new TABASCO® Food Tour.

TABASCO® Food Tours are the new way to sample Cajun food in one trip, although the food is so delicious you will want to make it a yearly visit.

Growing up in the surrounding area meant I’ve passed by the restaurants featured on the tour, even though I had never been there. By the end of the tour, I had eaten at some of the best local hot spots in addition to getting some history about the town I thought I knew.

The food tour left from Avery Island after my TABASCO® factory tour. It’s not part of the food tour, but make time for it during your trip since you get a feel for just how massive the TABASCO® brand is when you’re here.  The white SUV picked our group up in front of the TABASCO® Country Store (be sure to go in and see the “money ceiling”). The stretchy red and white rubber TABASCO® bracelet, which you can only receive by going on the food tour, identified us as the day’s tour group. 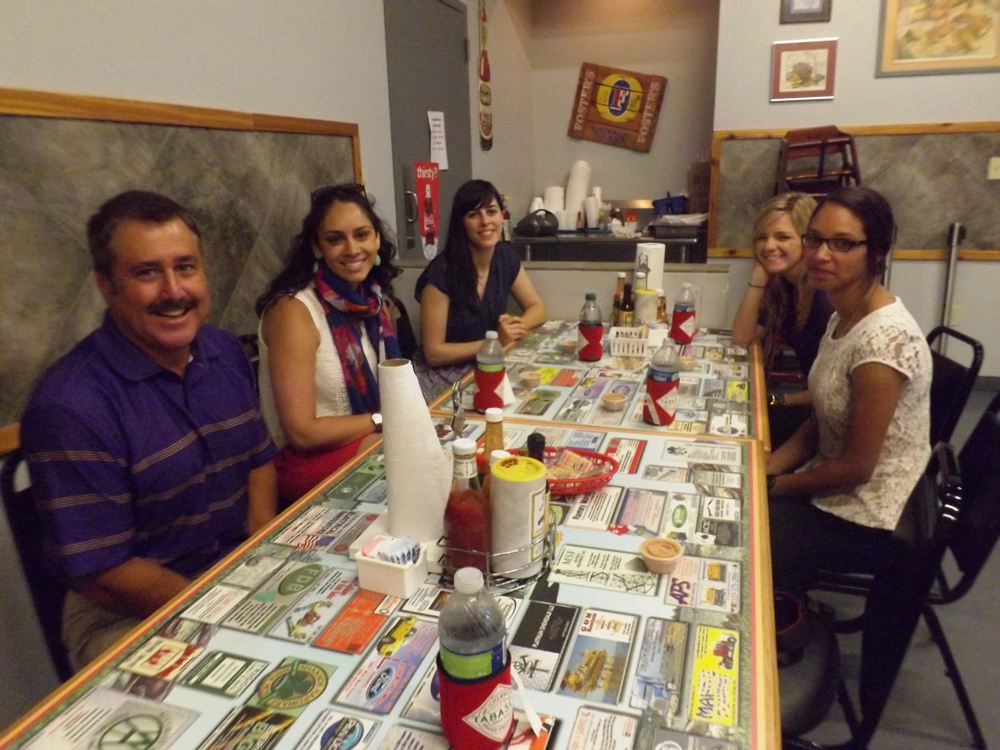 Our tour guide for the day was George Segura, who is the brand sales supervisor for TABASCO®. My fellow adventurers were Kristen Jolivette and Michele Duhé (both TABASCO® interns) and Kate Salloum and Rachel Chester. Kate and Rachel from Toronto, Canada were staying in New Orleans. Kate was visiting New Orleans for a business trip and she and Rachel decided to make it an extended vacation for the two of them.

Our first tasting was at R&M’s Boiling Point right off Hwy. 90 in New Iberia where we each enjoyed six large boiled crawfish. The Boiling Point was a great way to kick off the tour since our Canadian companions had never tried crawfish before.  It was a fun time for us teaching them the art of peeling.

During the meal, Mr. George gave us a little history on crawfish and we told the out-of-towners about our favorite ways to eat crawfish. 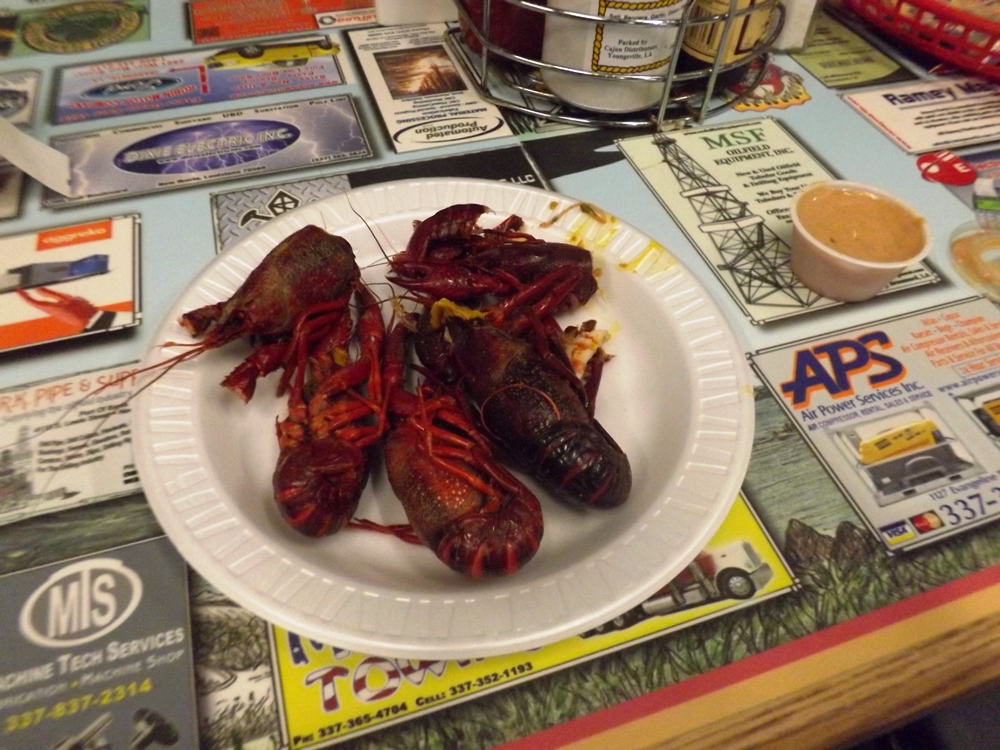 After rinsing our hands it was back into the SUV and on to our next stop, Legnon’s Boucherie.

We were treated to both seafood and regular boudin, as well as home made cracklins. I preferred the seafood boudin, but I always have. The chicken was great, too.

The culinary lesson the Canadians learned from this stop was that there are many ways to eat boudin, and all of them are delicious.  They tried just the stuffing as well as the stuffing and the skin.  They said that they liked it either way, because the stuffing was just so scrumptious. 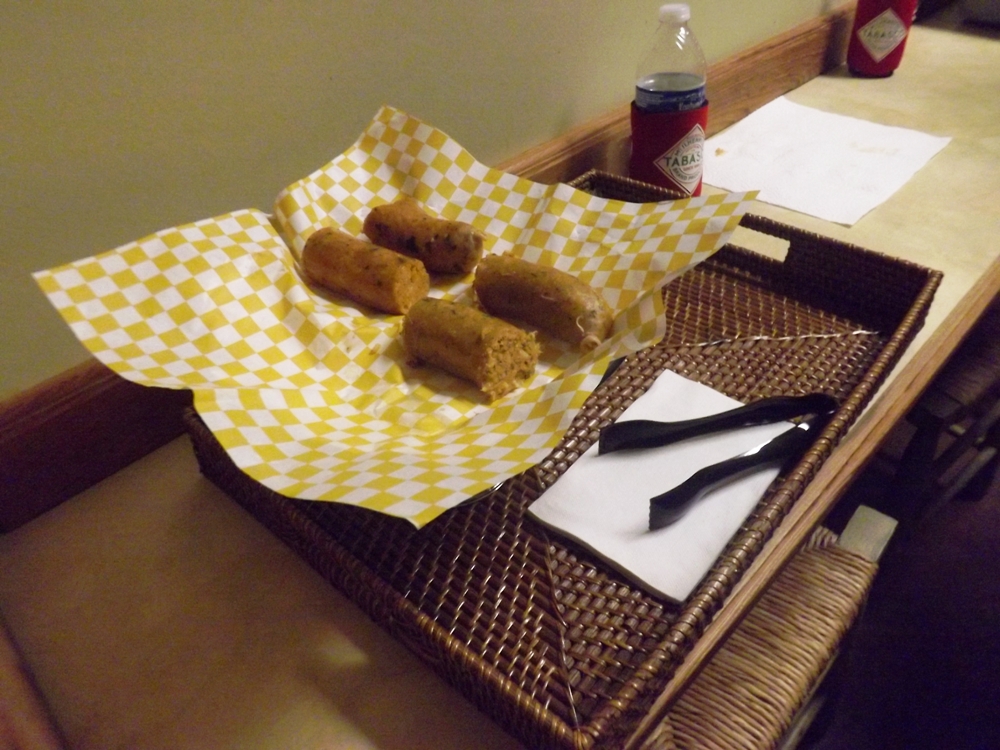 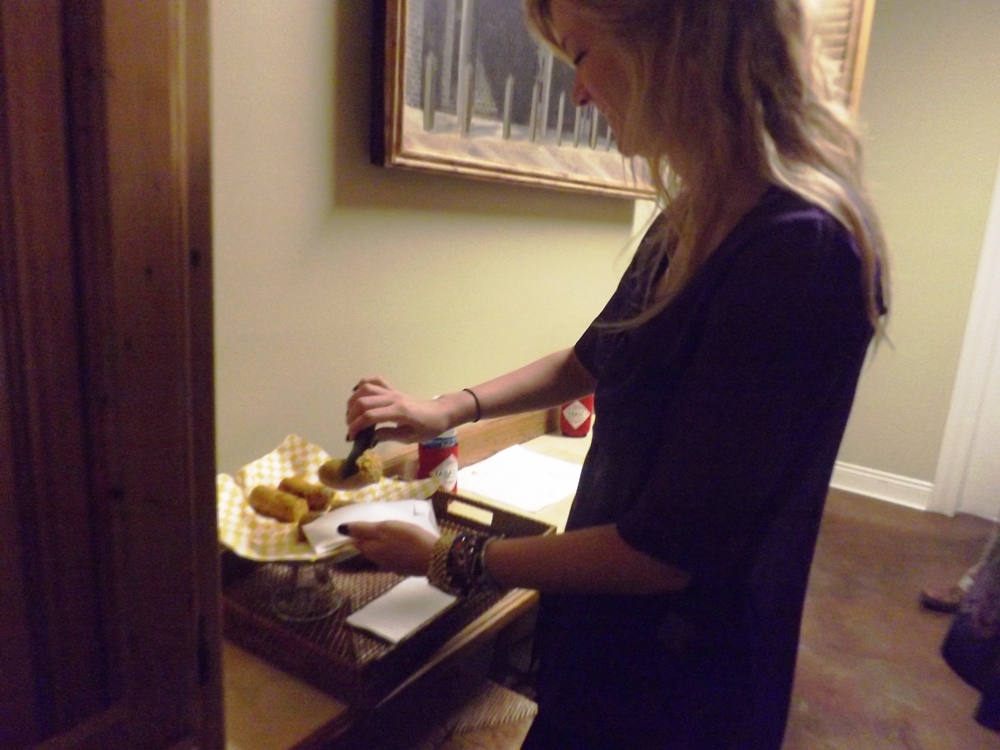 We finished up at the Boucherie, and made our way through the historic district to the KONRIKO® Company Store/Conrad Rice Mill.

Instead of a full meal, we received cups of KONRIKO®’s famous wild pecan brown rice. The store is an attraction of its own with all of the colorful souvenirs and products available for purchase. One can spend hours simply browsing for the perfect seasoning to bring home before even touring the still-working rice mill. 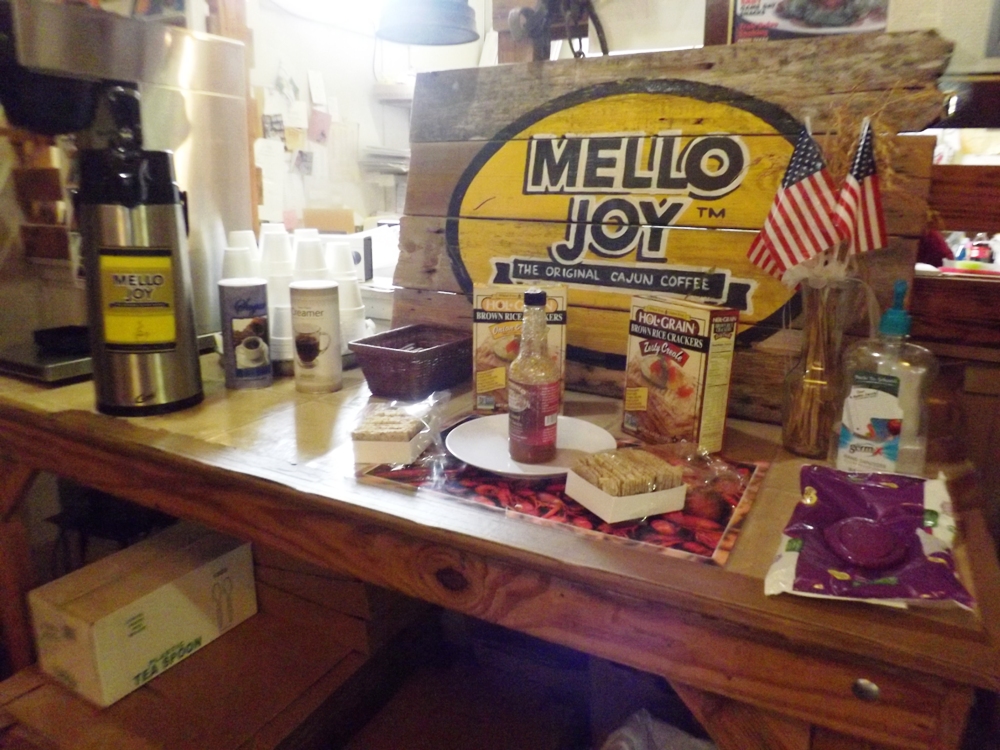 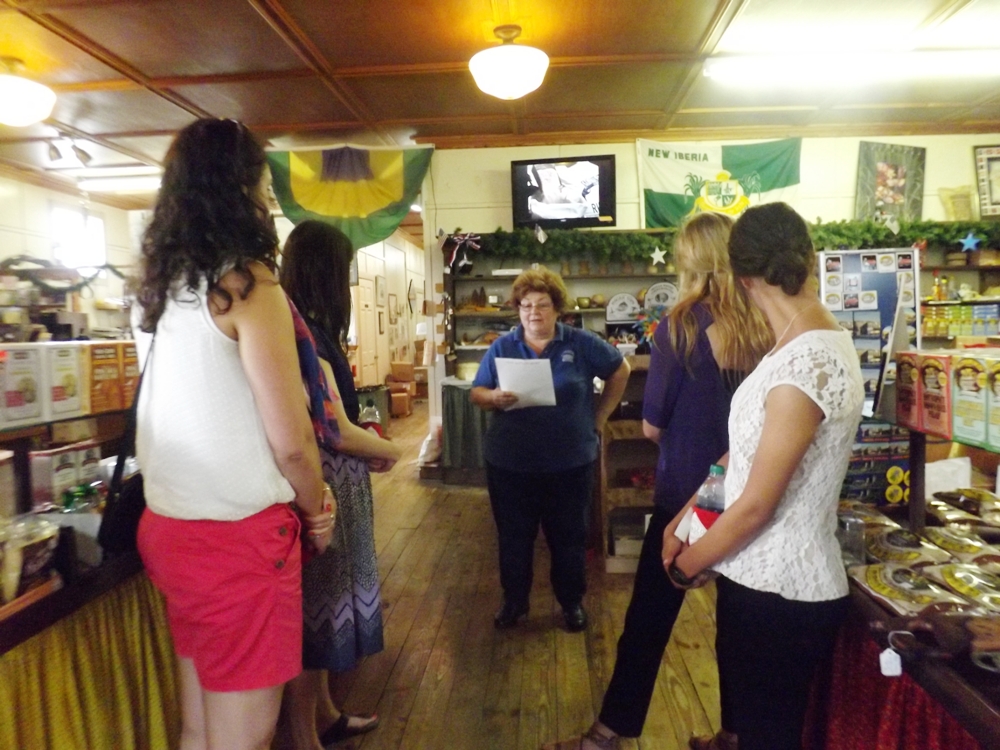 I added KONRIKO®’s Creole Seasoning to my rice and it gave my treat just enough kick. We also got to sample some of the HOL-GRAIN Brown Rice Crackers, which are one of KONRIKO®’s original creations.

After the rice mill, it was off to another meat market. Dave’s Quality Meats & Plate Lunches is well known for their French breads with various stuffing.  We got to sample the jalapeño stuffed French bread, along with more boudin and cracklins.

By this point we were just about stuffed but we still had two more stops left! 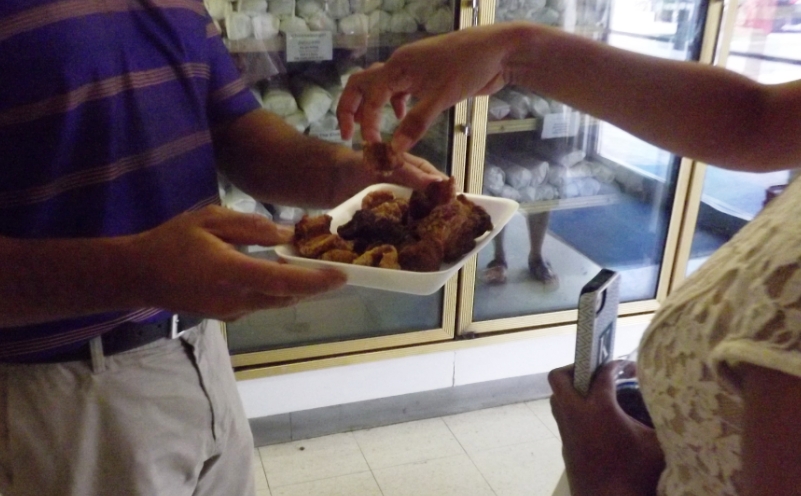 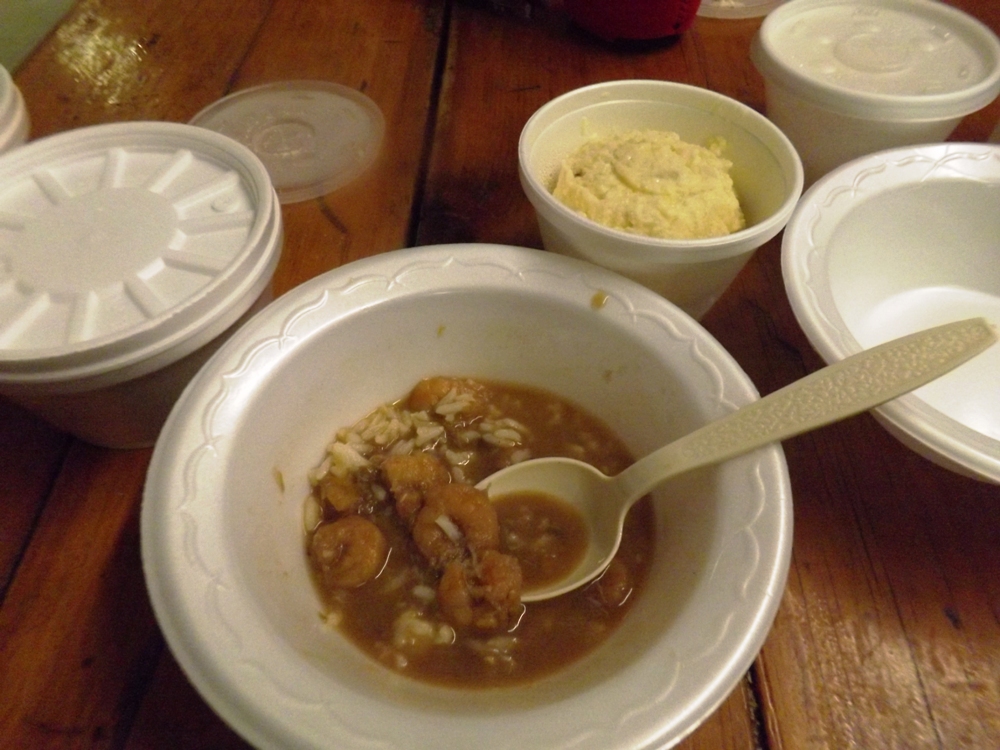 One of those two was Bon Creole, where we ate seafood and chicken gumbo. Yes, two bowls, and both were delicious. I preferred the seafood gumbo.

Our culinary journey was nearing its end. We’d had crawfish, gumbo, boudin and much more, but there was still one more dish we had to have – dessert.

Clementine Dining & Spirits is known for its sophisticated atmosphere. We had the restaurant to ourselves, as the owner was getting ready for the night’s opening.

I’ve never been in a location where the entire place was almost empty, especially not one as upscale as Clementine. It felt like we had rented out the restaurant, and it was exhilarating being able to explore without worrying about getting in the way of other diners or the wait staff. 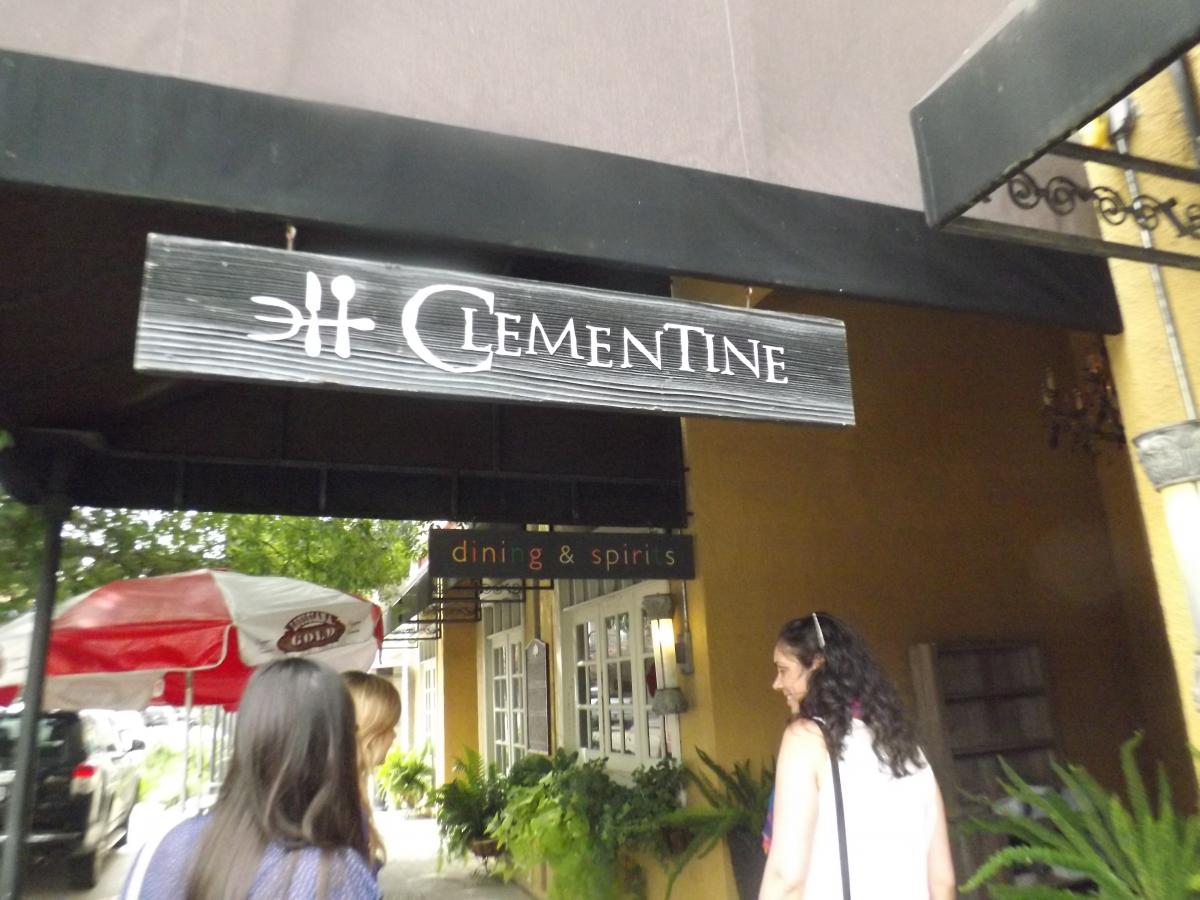 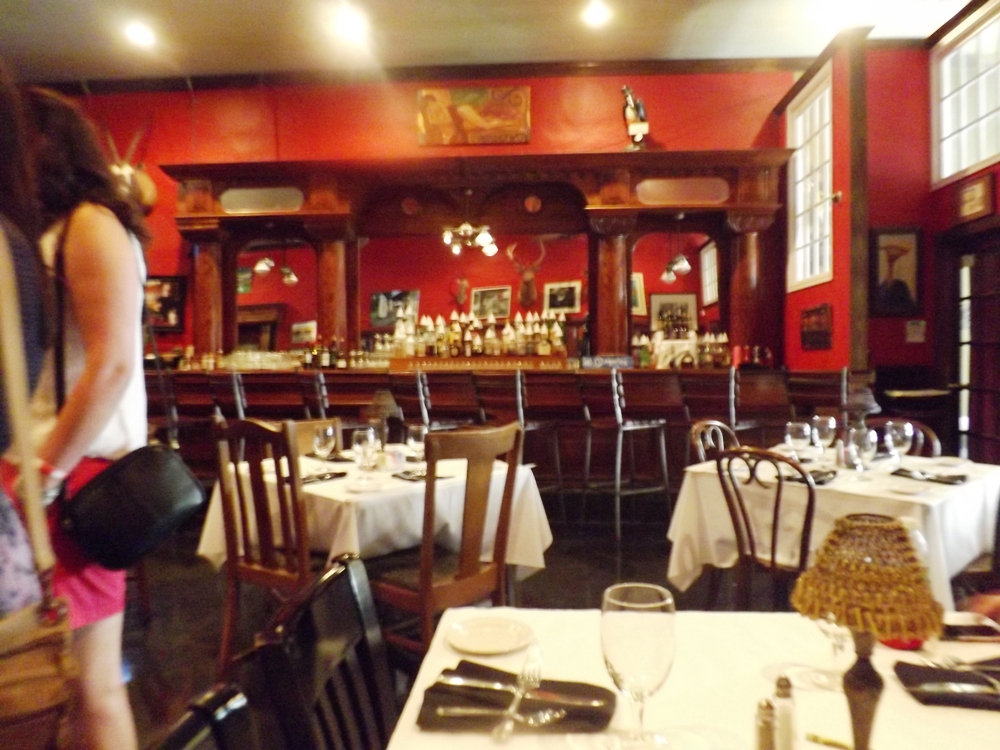 We were able to fully appreciate the floor to ceiling artwork while our bread pudding was being prepared.  After the first bite, it seemed as though our full stomachs did have just enough room left for dessert. It was delicious!

As we filed back into the SUV one last time, we discussed our family traditions and what makes places like New Iberia so unique. It seemed that no matter where you come from in Louisiana, food plays a part at every family gathering.

Living in Southern Louisiana all my life means that I’ve grown up eating Cajun food and can tell when gumbo is made from scratch versus out of a jar (the roux is darker). It also means my hesitations may have been higher than the Canadians’ on the tour.

Like most Lousiana residents, I have my preference of who cooks my food, because (as we’ll testify to the high heavens) no one else can cook it like that person. For me, I’ve always said my dad makes the best seafood gumbo, but Bon Creole definitely challenged that statement.

I think that was what surprised me the most about the tour. It not only introduced me to new restaurants that I plan on frequenting more, but it challenged some of my favorite dishes that I’ve always said only my mom knew how to cook. If that doesn’t say something about the food offered on the TABASCO® Food Tours, then I don’t know what does.