New York Times bestselling author James Lee Burke spent his summers growing up in New Iberia. His literary detective Dave Robicheaux visits many locations in Iberia Parish — from Main Street to the plantations of Jeanerette and the coast of Cypremort Point.

Visitors can take a self-guided tour to some of Dave’s haunts and locations mentioned in Burke’s novels. Download our Robicheaux books locations map here or pick one up at our welcome center. 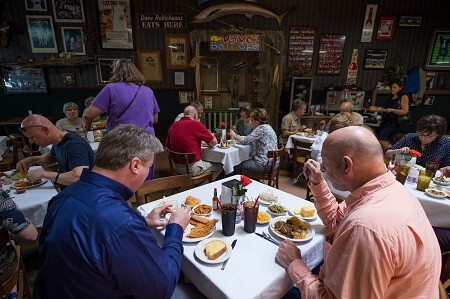 Grotto of Our Lady of Lourdes & Main Street

Dave’s office was located in City Hall on Bayou Teche with a “grand view of a religious grotto and wonderful oak trees next to the city library.” The Iberia Parish Library and Grotto of Our Lady of Lourdes make up a public park with a shrine dedicated to veterans from New Iberia.

Dave calls East Main Street in New Iberia “probably one of the most beautiful streets in the Old South or perhaps the whole country.”

This award-winning historic district gets several mentions in Burke’s books, and other spots of note include the Episcopal Church of the Epiphany (303 W. Main St.), where Dave attends AA meetings, P.R. Burke’s Office (223 E. Main St.), operated by Burke’s cousin and mentioned in The Glass Rainbow, and the Bayou Teche Museum with a permanent exhibit on the author. 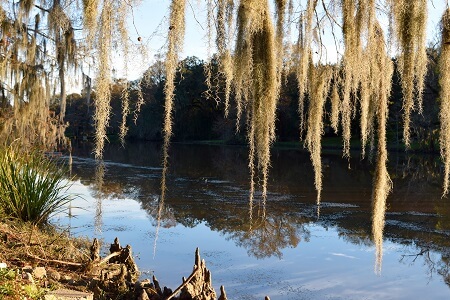 Featured in The New York Times, this soul food restaurant along Pershing Street is one of the eateries Burke talks about in his novels. Brenda Placide and her staff serve meals “straight from mama’s kitchen” — including red beans and rice and crawfish etouffee.

Follow Pershing to French Street and St. Peter’s Catholic Church Cemetery. Dave’s wife Annie was buried in his family plot at this cemetery in Heaven’s Prisoners.

St. Peter’s Church was built in 1836 on land donated by the Frederick Duperier family. Church Alley, now a pocket park between Main Street and St. Peter Street, was left open to fulfill the donation’s provision that the church be visible from the Duperier home (where Mt. Carmel is today).

In the same novel, Dave and Annie brought Alafair to Mt. Carmel after rescuing her from a plane crash in the Gulf of Mexico. Once the first hospital in New Iberia, the 1850s building became a Catholic girls school in 1872 and was closed in 1988. Stroll to Mt. Carmel and take in the view by walking the boardwalk and crossing over the bayou from P.J. Allain Waterfront Park and Sculptural Garden. 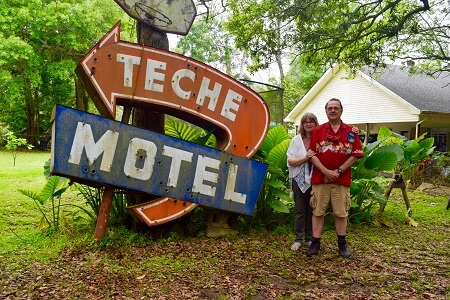 Perhaps one of New Iberia’s oldest locations to stay the night, this motel’s motif and character fit into the world of Dave Robicheaux like no other. Dave loved the neon sign that is still on the property today. Clete also rents a room to live here in the novel Creole Belle, and cottage No. 4 was used in the 2009 film version of In the Electric Mist with Confederate Dead.

Experience Iberia Parish’s bounty of local seafood at one of these local favorites. Crawfish, crab, oysters and seafood dinners are served with a Chinese flair at Jane’s family restaurant. 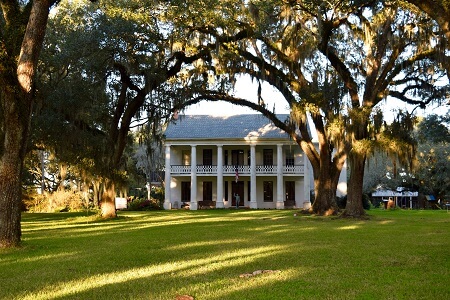 Start the day in the alley with small bites, pastries and custom drinks — including locally-roasted coffee — before taking a 20-minute drive out to Jeanerette.

Three historic plantation homes located in Jeanerette have been used in Burke’s work. Both private homes, Alice and Bayside plantations can be viewed from Highway 87 and are designated with historical markers. Alice is a 200-plus-year-old home, while Bayside was built in 1850 by Francis DuBose Richardson, a friend of Edgar Allan Poe. In The Glass Rainbow, Dave calls Bayside “one [antebellum home] that is arguably among the most beautiful in the Deep South.”

Albania Plantation on LA 182 E. was used in the film “In the Electric Mist” as a stand-in for Bayside. This home was built between 1837 and 1842 on 6,500 acres and used to belong to artist Hunt Slonem.

Continue your drive west to Cypremort Point State Park, a sportsman’s paradise with a man-made beach where families can experience the outdoors like Dave Robicheaux, who ritually took his daughter Alafair to a fictional open-air restaurant at the Point. Mentioned in A Morning for Flamingos, this coastal spot is where many area families spend their summers fishing, boating and swimming. 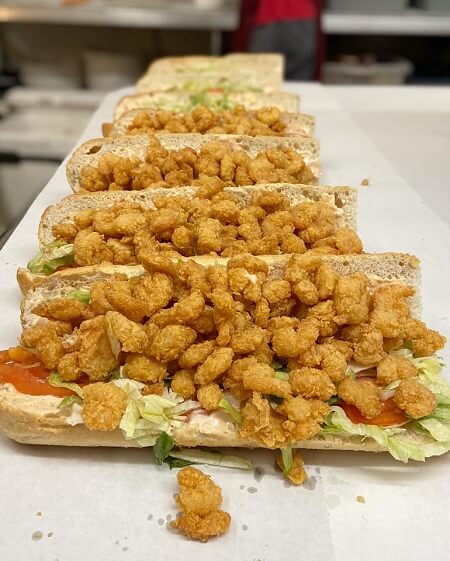 Head back to New Iberia and visit one of Dave’s local eateries. Burke’s detective could often be found here chowing down on a shrimp po’boy. Gumbo, seafood baskets and plate lunches are also served seven days a week.

More of Dave’s haunts can be found around New Iberia, starting at the Iberia Parish Courthouse at 300 S. Iberia St.—the location for his office in earlier books. Dave also shared this office with Special Agent Rosie Gomez in In the Electric Mist with Confederate Dead.

Burke’s grandfather, Walter Burke, lived in the Burke House on Main Street. As a youth, Burke visited his grandparents, played along the banks of the Bayou Teche and fixed in his mind the romantic image of New Iberia that pervades his books.

“I drove down East Main under the arched live oaks that spanned the street, toward the Shadows, a red brick and white-columned antebellum home built in 1831 on Bayou Teche,” Burke writes in Cadillac Jukebox. Built for a wealthy sugar planter, the Shadows-on-the-Teche was home to four generations before becoming a National Trust Historic Site. Guided tours of the home and gardens are available. 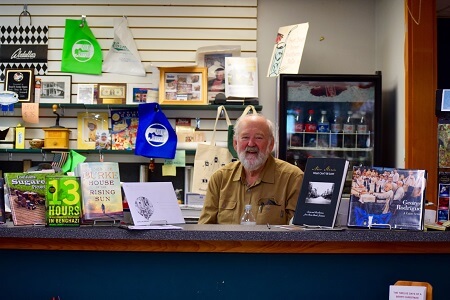 Books Along the Teche

The local bookstore where Burke fans can find signed first editions of the Robicheaux novels, as well as other modern bestsellers, is located just down the street from the Shadows. Books Along the Teche’s owners, Howard and Lorraine Kingston, are the resident experts on anything and everything James Lee Burke.

Tip: Go during the Books Along the Teche Literary Festival.