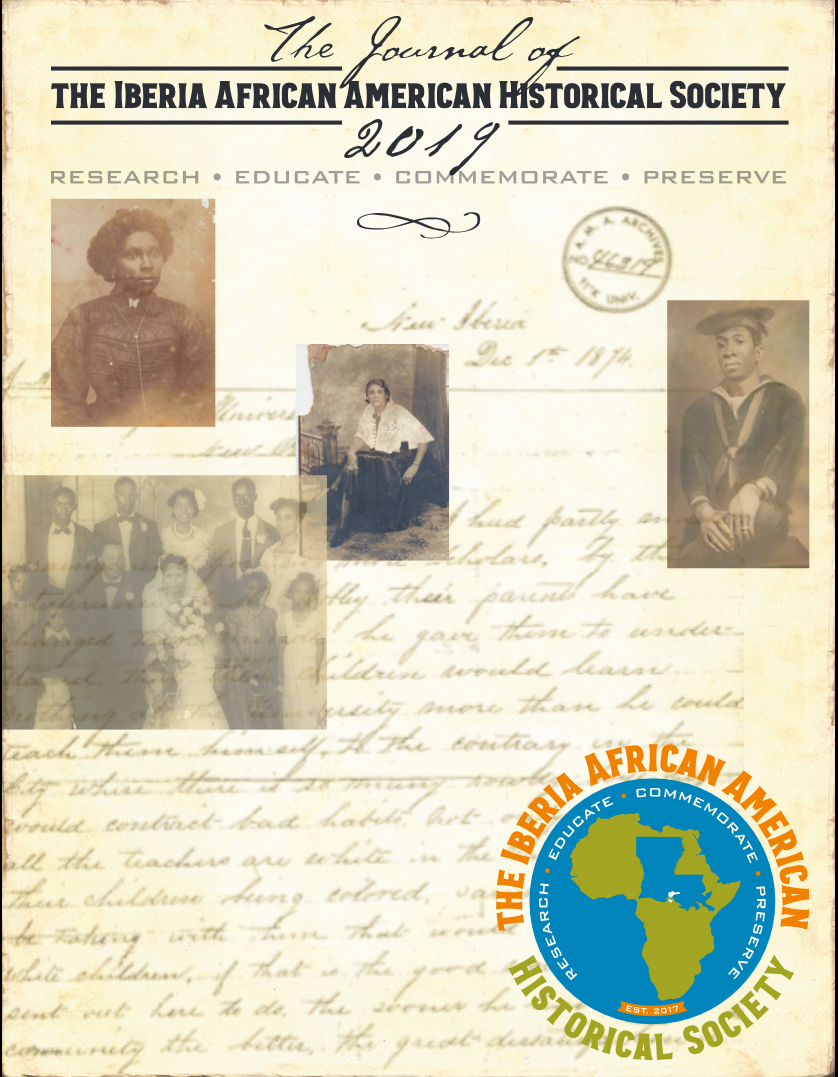 A Message from the Editors

The history of African Americans in Iberia Parish (formerly part of the Attakapas district) dates back to the 18th century. Shamefully, that history has been ignored, marginalized, and in some cases erased.

At least one history book written about World War II veterans of Iberia Parish and still found in the Parkview branch of the Iberia Parish Public Library ignores the service and sacrifices of African American men and women veterans from Iberia. Another book written in the early 1960s to celebrate the physicians of Iberia Parish from the 19th century to the 1950s purposely excluded African American doctors, including George W. Diggs, M.D., who was actually practicing in New Iberia at the time the book was produced. Dr. Diggs’ years of practice in New Iberia spanned 50 years.

This is the inaugural issue of The Journal of The Iberia African American Historical Society. It is an online journal composed of articles about the long and unique history of African Americans of Iberia Parish.

It is our intent that the journal will be a first step in countering the falsehoods, omissions, and distortions of Jim Crow-era books such as the ones described above. It will be published yearly for the benefit of our members. The public, however, will have access to a printed version of the journal to be housed in the Genealogy Room of the Parkview Branch of the Iberia Parish Public Library and the African American Collection in the St. Peter Street Branch Library.

IAAHS has begun to recover the histories of African Americans in Iberia Parish, including:

Recently, IAAHS has commemorated the 75th anniversary of the 1944 violent expulsion of all the Black doctors and NAACP leaders from the parish. The historical society has erected official state markers to commemorate some of these histories.

In the current issue, you will find articles introducing two women born into slavery and associated with the Weeks family of New Iberia. One (Charity Pope) was enslaved by the Weeks family of The Shadows on the Teche. The other (Harriet Nottingham Turner François) was born into slavery in Kentucky and had a longtime relationship with the same family, though it cannot be confirmed that she was ever their chattel property.

We invite IAAHS members and the public to submit manuscripts on the history of African Americans in Iberia Parish up to the end of the Jim Crow era of segregation.

These manuscripts must be research-based. We strive for accuracy and as such require that submissions include primary sources (such as oral histories, journals, photographs, archive materials, civil records, etc.). Contributions may be submitted by email. Please provide your name, email address and phone number.

Thank you and we look forward to many years of producing a journal that grows in quality and meets the expectation of our members. Feel free to share any comments, suggestions, and/or concerns at the above email address. IAAHS members and the public may purchase a hard-copy of this journal for $20.

New Iberia graphic designer and IAAHS member, Anne Darrah, designed the beautiful cover for this issue. Forming the cover’s background is a handwritten 1874 letter that Iberia Parish state senator Samuel Wakefield wrote to the president of New Orleans’ Straight University. Anne also enhanced most of the other images included in the articles in this issue. All the photographs used on the cover come from Phebe’s family collection.

For more information contact the Iberia African American Historical Society at (337) 519-3957, IAAHS.org or by e-mail.